Colorado is the most beautifu 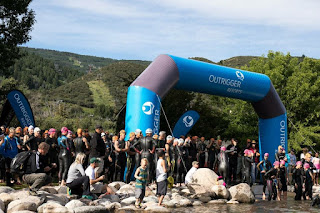 l area that I have ever traveled to, raced in, or even just passed through. Whether it was the aspens quaking in the wind, the creeks and rivers, or the towering mountains surrounding the area; it was all amazing.
On race day I woke up to the cold and excited for the chance to race a new course in the area. I wasn’t nervous at all which was a big change for me, but I can attribute that to the fact that my little brother Mark was racing his first triathlon that morning. So instead of being nervous I was able to distract myself by making sure that Mark himself wasn’t too nervous and that he had his gear in order.
The water was the perfect temperature and the trails were supposed to be great, so I was anxious to get started. The swim started on a small boat ramp at the most 15 feet wide, and rather than swimming in a triangle, the course was marked in the four corners of the rectangular lake. This inherently clumped all the swimmers closer together than usual. The altitude of around 9000 feet took its toll on my breathing as well leading to a pretty rough swim.
I had a smooth first transition and started the bike eager to make up lost ground from the swim. This bike course was a brutal one, it had over 3000 feet of climbing in with about 1000 less of descending all in 15 miles. The climbs were steep and long and most of the ride consisted with some heavy grinding of the low gears. The final descent of the course was really a fun one with a bunch of roots, drops, and steep stuff.
Transition 2 went smoothly as well and I was on the run. Even more of the steep climbing would be found on the run, over 1000 feet in 5 miles, but at least this time we got to go down just as much as we got to go up.
I finished in 2:51:05, 63rd overall and 5th in my age group. The four guys ahead of me were all on the Colorado State Triathlon Team, one of them passing me during the run after I passed him in transition. Although I was not particularly happy with the number 5 on my result card, the Colorado State guys put on an impressive performance. I realized later after looking at my times and stats that I raced pretty well; I just wished I’d gotten 1st or 2nd and qualified for Maui. 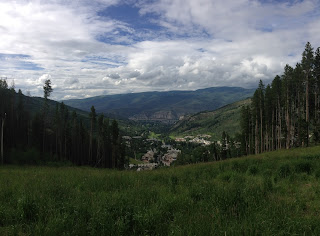 About the Author: Curtis Duncan